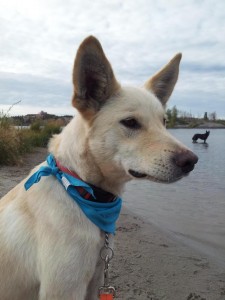 Rocky from the NWT SPCA

The post was originally written by Dr. Emily Weiss in 2013 and it’s worth a read. She discusses the common excuse that we all make in both professional and personal situations: it won’t work here. Instead of trying something that has been successful or helpful for others, we already claim to know that, for whatever reason, it won’t work here.

In the post she specifically calls out the different types of ‘heres’ she faces:

The only way to break out of that excuse is to give something an honest try. You may be right! It may not work here or work for you. But you may also find a new way of doing something that helps you or your organization succeed.

Such a change in policy helped the Erie County SPCA. According to an article from Maddie’s Fund, in an attempt to reduce the length of stay for older cats, the Erie County SPCA implemented a “free over three” adoption policy for cats three years and older. Despite the fear that a free adoption policy “wouldn’t work here” their change was successful. In the first year, cats over the age of one had an average length of stay that was 70.8 days less than the previous year.