There is a lot of debate over how well the ‘sad animal’ advertisements work. Do people respond better when you tug at their sympathy, or do they want ads that make them feel good? A rescue group in Melbourne, Australia called The Lost Dogs Home decided to try to flip that advertisement model on it’s head.

What they came up with was an adoption promotion that portrayed not the animals as pitiful creatures needing to be saved, but rather the humans. Targeting office workers, the campaign brought dogs to parks in Melbourne during lunch hours and gave the workers a chance to get out from behind their desk and take a walk with an adoptable dog.

The group handed out flyers and put up ads showing the office workers as sad creatures trapped in cramped conditions all day long. This drew them out to the park where over 5,000 people took walks with the shelter dogs and, most importantly, every dog ended up getting adopted. 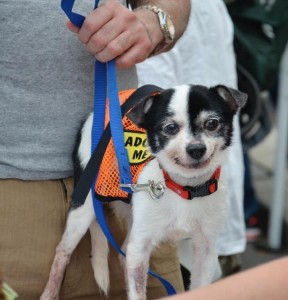 Spunky from Waggytail Rescue is ready for his walk.

Are there areas by you that you could host a one-day pop-up adoption event? Even if you were not able to get all your pets and volunteers out, bringing just one or two somewhere to promote your group could be very beneficial.

Now that it’s summer on this half of the globe it’s time to get your dogs out and about to meet potential adopters (and get them some safe summer exercise).