Back in 2012, Petfinder member Greenville Humane Society appeared in a list on the Communication Arts website for poster advertisements they had produced. You can check them out here. 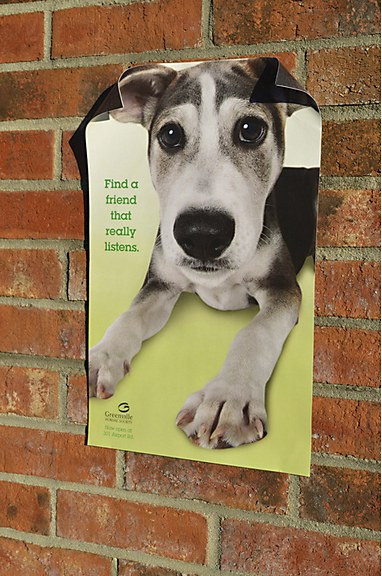 The exhibit list, and the Communication Arts site, is one of the top sources for inspiration aimed at graphic designers, ad agencies and anyone involved in the visual communication industry, so getting their posters featured is a huge acknowledgment. These posters were created with the help of local ad agency Erwin Penland and feature wonderfully simple 3-D elements to really bring the pets featured on them to life.

Printed posters like these are beneficial for not only getting your name out but also for keeping you within your budget, as they can be cheap to produce. When done well they also let you establish your organization’s identity, which for the Greenville Humane Society can be seen from their architecture down to their pet list as being modern, inviting and literally green.

It’s also a testament to both the medium and the subjects that these type of advertisements and promotions can still be so effective. Case in point is a new promotion from the Arizona Humane Society.

In May we wrote about a rescue group in Singapore who had partnered with IKEA to bring life-sized cutouts of their pets into IKEA showrooms. 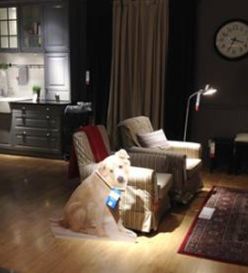 Now, the Arizona Humane Society has been able to partner with IKEA in Arizona to bring adoptable pets to showrooms in their area. Using the same process, they printed out life-sized cutouts of available pets and gave shoppers the information on how to adopt that pet. All six pets that were displayed at the time of the article were adopted!

IKEA in Tempe is the first store in the US to showcase rescued pets like this, but hopefully it’s just the start of a trend. And it’s another example of how powerful some paper and the photo of a pet in need can be.